In the Studio with The Gift - J6 Pix

In the Studio with The Gift

For artists in the music industry, there are 3 main sets of photos; live shots, rehearsal shots, and promotional portraits. Which are the most important? I really couldn't say, it depends on the message being conveyed at any given time, but it is important to maintain a fresh suite of each type to maintain audience interest. For around 3 years now I have been shooting The Gift building up a fairly substantial portfolio of images from their live performances around the country. This was a relationship that happened by chance after their regular photographer was unable to make a shoot, and my old man (who has a somewhat fanatical friendship with the band) asked if I could step in. Since that day I've not looked back and it's been a fun few years.

Over this time we have built up a significant portfolio of images of the band doing their thing live, and as I grew to knew the guys and they became more relaxed around me the quality of the photos increased exponentially. With such an extensive catalog of live images, I knew it was time to shake things up a bit, so I had suggested perhaps doing a studio shoot to add a new dimension to the story of the band. This was well received, but with 6 different lives to juggle and intensive work being carried out on their latest album, getting together for some pictures was not really a priority. Then, out of the blue Mike drops me a message to ask if I'm up for doing some portrait/promotion work for them at their rehearsal studio.

There was however a catch, this being that it had to be in 2 days time, and I had to fit it in around their already limited practice session, and there was no brief to speak of. OK, blank canvas in an unknown environment with very limited time; challenge accepted.

I agreed to the Saturday and started to do some research on the studio to understand what I've got to work with, but then as quickly as it was on, it was off again. Mike dropped me a message along the lines of everyone wasn't going to be there, so could we do the following Tuesday, and the shots need to be available for that Friday. Seizing an opportunity to get myself ahead of the game, I told Mike I'd drop by on Saturday anyway to catch up with the guys and check the studio out in preparation for the main shoot and grab some shots of the band rehearsing whilst I'm there.

Saturday night quickly rolled around and here we all were in a dingy, grubby rehearsal studio; not ideal for taking portraits. I did my recky and made a few mental notes to consider on my return the following week. Not before long, the band was away with the new material that has kept them busy all these months. Having been involved in the music scene in a previous life, I know how much effort goes into any performance or a creative piece, but never before have I even considered how 6 different personalities could come together to create something remotely cohesive. 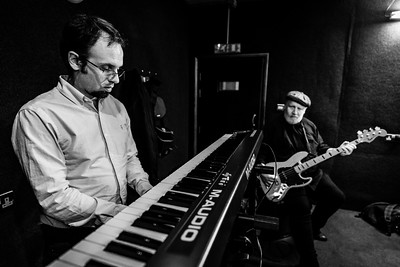 Shooting The Gift is always a pleasure, and in this more intimate setting was no exception. The guys got on with doing their thing, and I got on with mine, weaving in and out of the wires and instruments in the cozy room. As the evening unfolded there were great opportunities to capture the sides of the band you don't normally see as they worked through each track practice their new material.

Every track brings unique challenges for each member of the group, so naturally, there are a lot of mistakes and frustration as they worked hard to perfect the live performances. At times just one transition within a song was being worked and worked until everyone was happy with the final result.

What is always evident is that despite the guys being very different people, they all get along well and are able to communicate effectively between each other, something that cannot be said for some smaller bands with much bigger profiles. Throughout the session, the guys would pause and discuss the smallest of sections of the sound and collectively hone it until it was exactly how they intended.

This was a rare glimpse into the workings of the band, watching their performance being perfected beat by beat. With the album launch gig fast approaching, there were various issues that needed to be worked aside from perfecting the tracks themselves. Transitions, intro's and timings, all little things that you would not necessarily notice, but all add to the overall cohesiveness and polish of the performance. The smallest sound effects, echoes, and note trails are played out and scrutinized.

As the work came together, serious faces turned to elation and the room lit up with looks of satisfied achievement. This was the real magic and the other side of the band that I was hoping to capture.

But this session was only a preamble to the main photographic event. With a solid suite of shots of the rehearsal logged, it was time to head home and give some serious consideration for the portrait shoot that was arranged at the same location the following Tuesday.  As you can see from the images above, the studio is not the most attractive backdrop, so I had to think about how I'll be able to take professional portraits in such an environment.

The best option here would be low key portraits which would obscure the unsightly backdrop and direct full attention to the subject. But as a natural light photographer, how would I achieve this?

Yes, I admit, I don't know how to use a flash and I don't own one. When I started out, I didn't have a need for one and decided to perfect the use of natural light. I understand the theory of flash and can see where it is beneficial, but in my present situation wishing I had one wasn't going to get the shoot done.

What I did have at my disposal was a torch, a reflector and a whole lot of studio music equipment. My thinking was that if I were to clamp on a torch to a mic stand and clamp the reflector on the opposite side I could diffuse the harsh LED light to bath the subjects face. Over the weekend I nipped into a hardware shop and picked up a second LED torch, a pack of batteries and some clamps then turned my thoughts to how I wanted the portrait to look.

A plan was starting to come together, I had penned down several shots that I hoped to capture to add some diversity to the shoot. This was likely to be a bit of a one-off, so I was hoping to capitalize on the time we had. I dropped Mike a message to find out how much time we would have to do the shoot before they returned to practice, to which he advised I would have an hour. Sixty minutes. 600 seconds per person, and that had to include group shots. No pressure then.

Tuesday quickly came round, and it was time to put my plan into action. I headed up to the studio with my partner a couple of hours before the guys were due to set up and do some test shots so we could hit the ground running. The setup was a little more challenging than I thought, as the clamps didn't want to grip the circular torch to the circular mic stand, so some creative engineering was required to get the desired effect.

With plenty of time, I explored different compositions then locked everything in until the guys arrived, which meant a somewhat nervous wait as I had been a little too keen getting to the studio. This was quickly forgotten, as the band drip fed into the studio and the shoot was underway. Here are the results, which I will walk you through with an introduction to the talented guys who are The Gift:

Singer, songwriter and charismatic frontman; Mike brings energy, passion, and theatre to his performances engaging with the audience and the band whilst occupying all parts of the stage.

Dave has a Jekyll and Hyde character about him; on stage, he wields his guitar with precision and comes across as super serious. Off stage, he is actually pretty laid back and a really nice bloke. It's always a challenge trying to capture the real Dave on stage, one I am happy to accept. 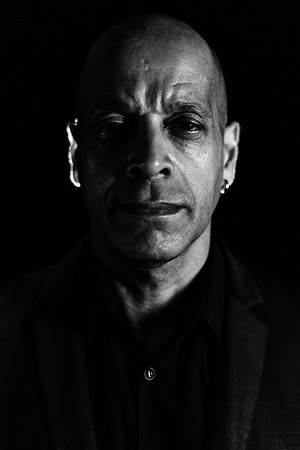 Style and sophistication - with sharp threads and dazzling shoes, Leroy brings a touch of class with his strings.

There's laid back, and then there's Stef. The band joker who brings bag loads of personality to the bass.

The band's rockstar; Neil looks most at home, bare-chested and perched above the skins beating his heart out.

This classical pianist brings a genuine sense of wizardry to proceedings. With multiple keyboards and fingers like spiders, I still have no idea how Gabs does it!

Aside from the portraits, the shot that was most important was a group shot of the whole band together, which in the setting was very difficult to achieve. Keeping to the low key theme, I set up the band in a V shape and aimed the lights to the middle of each row to produce the same shadowy effect. This was extremely difficult because there just was not enough space to get the lights even on either side and required an enourmous amount of tweaking to produce an image fitting of the band.

The cleaner way of getting all the guys into one shot was to create a composite of the portrait images and blend them together. All the images were shot in color and processed in both black and white and color for maximum diversity in the limited shoot.

Despite the lousy conditions and tight time constraints, we managed to pull off a fairly decent and consistent set of shots which I am pleased to say the band is happy with. All this in time for the final leg of promotions before the official launch of their new album this Sunday.

Now as this session has come to a close, I look ahead to the live performance with eager anticipation as I have not heard the new material properly yet. If you are interested to hear what The Gift sound like then head over to their website here and check them out. Their new album 'Antenna' is out now and available to download.

Better still, come on down to the Bedford in Balham and see them in action for yourself, I promise you will not be disappointed.

Looking for some shots of your band or music event and like what you see? Get in touch and let's get collaborating!